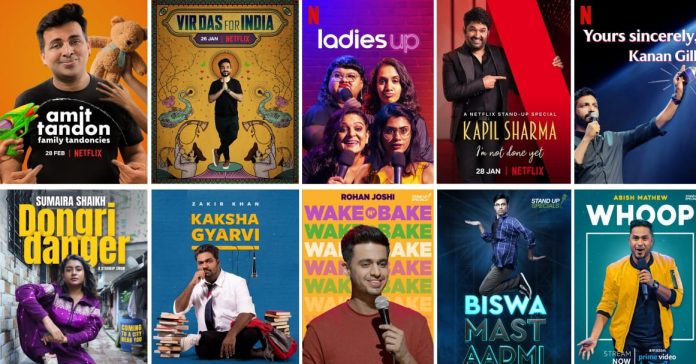 May 3 marks World Laughter Day this year to spread laughter all around the globe. It is believed that laughing helps to cure many problems that could be emotional or physical as ‘Laughter is the best medicine.’ The day is celebrated to raise awareness about the benefits of laughter. Here is a list of 10 stand-up specials by some of the country’s most talented and funny comics, available for viewing on various streaming platforms. Let the binge party begin! 1. Amit Tandon: Amit Tandocies
Platform: Netflix
Amit Tandon is a famous face in the comedy world that once belonged to the corporate world. People adore him for his relatable Hinglish jokes on life, marriage, kids, and everything else. One of the best things about him is that his jokes are well structured, clean and thought through. On his wife not laughing at his jokes he said, “You know, when she doesn’t laugh at my jokes is when I get confident about my gigs because somehow they work!” From the death of romance in marriage to the injustices of modern-day parenting, Amit Tandon shares wisdom and wisecracks as a battle-scarred family guy in ‘Amit Tandocies’. We’d recommend watching this one with your family for sure! 2. Vir Das: Vir Das for India
Platform: Netflix
With shows like ‘Vir Das for India’ and ‘Abroad Understanding’, Vir Das remains the only Indian-born comedian who’s bridging the cultural and geographical gaps between India and America. Pulling off comedy and satire within a history or cultural lesson can be a stretch. Especially when you remember that some countries define “freedom of speech” a little less freely than ours. But Vir Das in his Netflix special, ‘Vir Das for India’ pulls it off like a pro. This one should be on the top of your binge list! 3. Prashasti Singh, Kaneez Surka, Niveditha Prakasham, Supriya Joshi: Ladies Up
Platform: Netflix
Four of India’s best female comics, Prashasti Singh, Kaneez Surka, Supriya Joshi and Niveditha Prakasam spill out hilarious interiors in the four-part series called ‘Ladies up’ on Netflix. The sets are capped at fifteen minutes each, with no unifying theme or order, just a common push for all things weird. This one surely pushes the envelope when it comes to Indian stand-up comedy. Watch this for for these amazingly talented ladies cracking your bones with some of the funniest acts AND you won’t find as many one-hour specials dedicated to women comedians in the OTT space anyway. So what are you waiting for? Watch this right away! 4. Kapil Sharma: I’m Not Done Yet
Platform: Netflix
After creating a huge fan base with his TV shows, Comedy Nights With Kapil and The Kapil Sharma Show, the comedian has ventured into the digital space (Netflix) with his first comedy special, ‘I’m Not Done Yet’. This special by the comedy king will make you laugh and entertained for the entirety of its duration, without making you feel uncomfortable about laughing at those jokes. In short, this is the perfect feel-good comedy watch for any given day! 5. Kanan Gill: Yours Sincerely
Platform: Netflix
Kanan Gill is the other amazing half of Pretentious Movie Reviews, a well-known stand-up comedian as well. This eye-candy has been winning hearts on and off screens on Snapchat through humor. Do yourself a favor and follow this funny Indian comedian already! With his razor-sharp wit, Kanan is one of the most popular sketch makers in the country. The Mumbai-based comedian has performed over 1000 shows around the world and his show, ‘Keep It Real’, has been applauded with rave reviews from all over the world. Watch this one for Kanan’s impeccable comic timing and unmissable on-screen charisma! 6. Sumaira Shaikh: Dongri Danger
Platform: Amazon Prime Video
Known for her fiery brand of humour, Sumaira Shaikh brings out her experiences and stories with animation and vigour, while keeping the whole session an entertaining one with ‘Dongri Danger’. She cruises over some uncomfortable topics with familiarity and comfort, and takes audiences with her on this ride of mostly dark comedy. Above all, what shines through is her energy and connection with the audience in each and every one of her performances, especially with Amazon Prime’s ‘Dongri Danger’. Watch this one for some raw and real comedy! 7. Zakir Khan: Kaksha Gyarvi
Platform: Amazon Prime Video
Talking about the absolute best in the business, Zakir Khan is known for his emotional connection with the audience as well as excellent comic timing. He believes that comedy isn’t just about the joke, rather about a funny man saying things and if you look at his videos, you’ll second that thought. One of his best works includes his Amazon Prime’s solo stand-up special, ‘Kaksha Gyarvi’ where the comedian makes jokes about school life and couples them with his own life experiences, thus making the show a wholesome and entertaining for everyone watching it. You know you just cannot miss this one! 8. Rohan Joshi: Wake N Bake
Platform: Amazon Prime Video
Fan favourite comedian Rohan Joshi attempts to simplify the burden of being a responsible celebrity in his stand-up special on Amazon Prime Video India, ‘Wake N’ Bake’. In fact, ‘Wake N Bake’ is everything a thinking, slightly aware individual would say or do in the politically charged times of today. The humour in this one invites you for a good meal and better dessert but leaves you with an aftertaste of discomfort, just because he speaks his truth unabashedly. Bits about marriage, children, and friends give way to concurrent issues of class, privilege, and disenfranchisement. Go for this one if you’re up for some hard-hitting comedy, the Rohan Joshi way! 9. Biswa Kalyan Rath: Biswa Mast Aadmi Hai
Platform: Amazon Prime Video
Biswa Kalyan Rath‘s raw humor about everyday things will make you roll out of your sofas laughing, and at times and at other times, it gets you pondering. Biswa rose to fame with a show he put together with his good friend Kanan Gill, Pretentious Movie Reviews. You’d be lying if you said you hadn’t watched all of his videos already. His show, ‘Biswa Mast Aadmi Hai’ is considered to be one of the most freshest and boldest comedy stand-up special that there is out there. His brutally uncensored and relatable material is buoyed by unique delivery in the show perfectly. 10. Abish Mathew: Whoop
Platform: Amazon Prime Video
He is a kind of stand-up comedian who mixes comic timing and music well. Abish has been active on the stand-up scene for several years now. He is one of the better-known figures in the industry. He’s known for his marvelous work on shows like ‘Whoop’ and ‘Son of Abish’ and his stand-up and sketches with AIB. The best part about his show, ‘Whoop’ is that it’s politically incorrect. There’s the culture bashing, the middle-class ragging and the bitter nostalgia that makes his pieces worth watching.

India is on track to achieve its national commitment of Land...

Mobus services will not available on any route after 2:00 pm