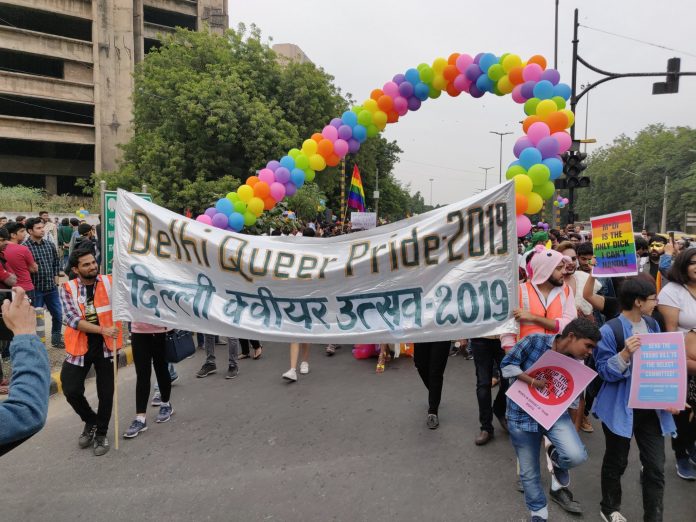 Members of the LGBTQI community celebrate during a pride parade in New Delhi on Sunday. Delhi had the most colourful day. But the one slogan that was on everyone’s lips: ‘Trans bill, haye haye’ Here’s why many are opposed to the Transgender Persons (Protection of Rights) Bill, 2019, that is currently being debated in the Rajya Sabha.

In the Rajya Sabha, MP Thawar Chand Gehlot demanded that the Transgender Persons (Protection of Rights) Bill be referred to a select parliamentary committee. If passed, it’ll be an assault on an already vulnerable community.

1. The bill requires trans people to be ‘certified’ by the district magistrate to have their identity recognised. Moreover, if a person is to change their preferred gender to male or female, they would need to show proof of SRS.

2. The bill groups intersex people under the definition of transgender, despite the distinction in identity & experiences between the two, thereby conflating sex and gender. This is horrifying misrepresentation but also an invisibilisation of intersex persons & their concerns.

3. The bill requires the court order to decide where a trans child will live — either with the biological family or the community family — as another blatant human right violation.

4. The bill does not provide a single organised protocol guiding the medical community on healthcare for the transgender community. Moreover, the rights of a trans person with regard to their fertility is critical, and inclusion in both artificial fertilisation and surrogacy.

6. As per the bill, any kind of violence, as much as that which would endanger a trans person’s life is punished by a term of a maximum of 2 years.

7. The chapter prohibiting discrimination is plagued with three major concerns:
i) Lack of enforcing authority
ii) Lack of remedial measures, be it in terms of compensation or any other means, for the survivor
iii) Lack of punitive measures to be taken against the violator

8. The Bill was passed by the Lok Sabha on 5th August, without any debate, amid chaos due to abrogation of Article 370 in Jammu & Kashmir on the same day. Now it awaits Rajya Sabha approval in the ongoing.

Some habits you are aware of being addicted

Why do we use face emoji?