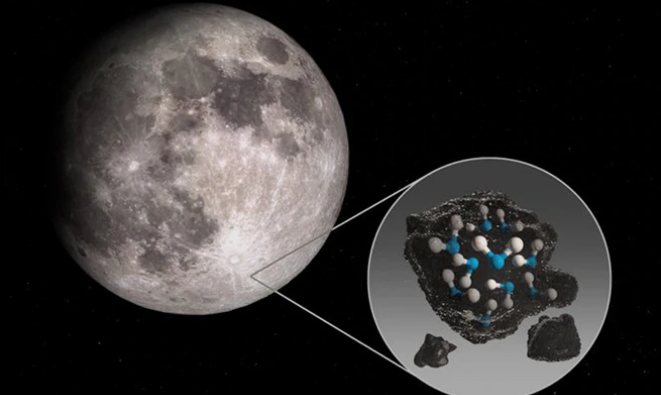 The moon lacks the bodies of liquid water that are hallmark of Earth but scientists said on Monday that lunar water is more widespread than previously known, with water molecules trapped within mineral grains on the surface and more water perhaps hidden in ice patches residing in permanent shadows.

While research 11 years ago indicated the water was relatively widespread in small amounts on the moon, a team of scientists is now reporting the first unambiguous detection of water molecules on the lunar surface. At the same time, another team is reporting that the moon possesses roughly 15,000 square miles (40,000 square kilometres) of permanent shadows that potentially could harbor hidden pockets of water in the form of ice.

Water is a precious resource and a relatively plentiful lunar presence could prove important to future astronaut and robotic missions seeking to extract and utilize water for purposes such as a drinking supply or a fuel ingredient.

“A lot of people think that the detection I’ve made is water ice, which is not true. It is just the water molecules because they are so spread out they don’t interact with each other to form water ice or even liquid water,” Honniball said. The second study, also published in the journal Nature Astronomy, focused upon so-called cold traps on the moon, regions of its surface that exist in a state of perpetual darkness where temperatures are below about negative 260 degrees Fahrenheit (negative 163 degrees Celsius). That is cold enough that frozen water can remain stable for billions of years.

There will be facilities for Archery sport in all Eklavya Model...