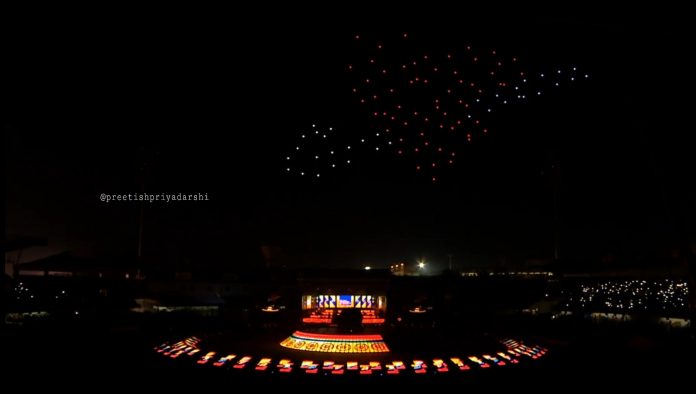 Apart from the opening ceremony that was held at Kalinga Stadium in Bhubaneswar with the presence of the most lovable Bollywood star Shah Rukh Khan, the charmed of the 2018 hockey men’s world cup opening ceremony was the drone light.

The drones performance took to the sky filled with the dancing star view form of celebration like the awesome view for the audience. The drone from the amazing Ariel illustration in the sky. Drone light shows was a kind of victory for the viewer to see animations of the game. The introduce of this drone structure was an entirely a new entertainment concept with light shows featuring where hundreds of drones were all controlled by a single computer and single controller where each one of the drones emits the combination of more number of colors.

The drone was managed through a software and animation interface on the Shooting Star drone system that allows a light show to be created the animation complexity. The system automates the animation creation process by using a reference image in which the system calculates the number of drones needed and where they should be placed also in which path should be taken to create the image in the sky. The software runs drones based on GPS reception.

This drone light gave a different animated view form of the shooting stars and provided a significant form of the light for the upcoming grand shows.