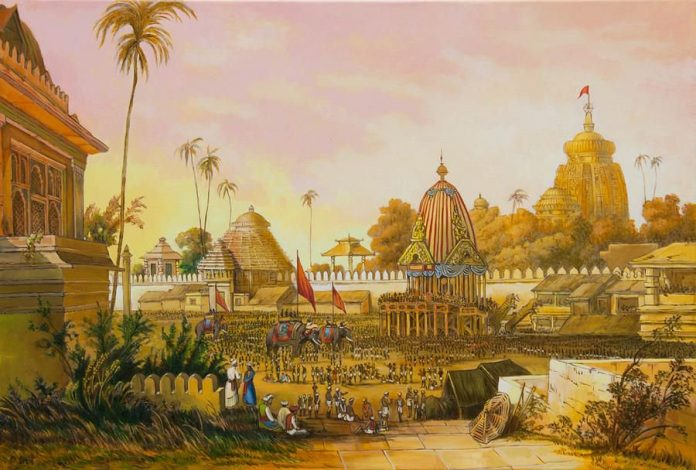 A nine days celebration of Jagannath Rath Yatra begins from Thursday, here in the state.

Millions of devotees from all over the world likely to join this celebration, in the district as the three wooden deities, Sri Jagannath, big brother Balabhadra and sister Subhadra chariots will be pulled in the Bada danda (Grand road).

The ritual procession begins with Ratha Pratistha, the inauguration of all three chariots conducted by Srimandir Purohits.

After that Ceremonial Pahandi Bije (swing) rituals begin with the idol of Lord Sudarshan being escorted to the chariot of Devi Subhadra.

Servitors escort the three deities to chariot in ceremonial Pahandi amidst the tunes of bells and cymbals.

Devotees dressed up as Lord Hanuman, Enthralling performances by several artistes present to express their love for Lord Jagannath at Badadanda.

The three chariots Nandighosa Rath of lord Jagannath, Taladhwaja Rath of Balabhadra, and Darpadalana Rath of devi Subhadra are  pulled by devotees through the streets of Puri to their aunt’s temple, Gundicha Temple.

As per sources, the Bahuda Yatra (Return Journey) of the three chariots to Jagannath Temple will be on July 12, Suna Besha (the deities adorned with gold jewellery) on July 13, Niladri Bije (homecoming) of Lords will be held on July 15.

The entire Bada Danda filled up with devotees to seek blessings of the holy trinity.

How do I stop nail biting?