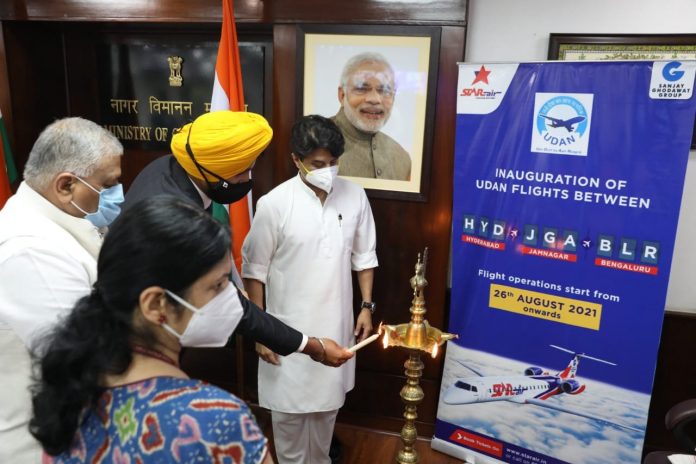 Joint Secretary, Ministry of Civil Aviation, Smt. Usha Padhee along with the senior officials of the Ministry of Civil Aviation (MoCA) and Airport Authority of India (AAI) were also present at the launch of the flight operations. Operationalizing of this route expands the aerial connectivity of Jamnagar to 03 major cities of India that includes Mumbai (Maharashtra), Bengaluru & Hyderabad.

Shri Jyotiraditya M. Scindia, Union Minister of Civil Aviation said, “I am happy to announce the kick-starting of regional connectivity from Jamnagar under UDAN. From today, M/s Star Air will operate first time direct flights between Jamnagar and Bengaluru including flights between Jamnagar and Hyderabad under UDAN. Jamnagar is the perfect blend of trade, cultural, and religious hubs. Moreover, I am delighted to announce that we are planning to commence 10 more additional flights from Gujarat under UDAN. The UDAN scheme envisioned by our Prime Minister Shri Narendra Modi has been a game-changer for the civil aviation sector of the country.”

The city of Jamnagar is also known as the World’s Oil City due to the presence of the world’s largest Oil Refining and Petrochemicals Complex near the village of Moti Khavdi & the second-largest private refinery in India located in the nearby town of Vadinar. Owing to the presence of more than 5,000 large-scale and 10,000 small-scale workshops manufacturing brass items Jamnagar was formerly termed as ‘Brass City’ of the country. The region records the largest production of brass items in the country.

Due to the non-availability of any direct mode of air or rail connectivity, people were compelled to spend long travel hours to reach these cities. Availability of direct flight between Jamnagar and Bengaluru will drastically cut down the travel time to 135 minutes from earlier 07 hours taken for air travel using connecting flights via Mumbai. Alternate option of road travel between these two cities also takes over 30 hours while train travel takes around 20 hours.

Likewise, the completion of the entire journey took more than 1 day to reach Hyderabad from Jamnagar by train and road travel or vice-versa.  Due to the non-connectivity of direct flights between these two cities, it took more than 06 hours for air travel using connecting flights. Now, natives can easily fly between the two cities by opting for a flight of just 130 mins.

Star Air was awarded the above routes during the UDAN 3 bidding process. The airlines are being provided Viability Gap Funding (VGF) under the UDAN scheme to keep the fares affordable & accessible for the common people. The airline will be operating thrice-weekly flights on the route and will deploy its 50-seater Embraer ERJ-145 aircraft. The route marks the commencement of the 32nd UDAN route by the airline.

Till date, 369 routes and 60 airports (including 5 heliports and 2 water aerodromes) have been operationalized under the UDAN scheme.

The flight schedule is mentioned below:

Are you possessive in the relationship? It may affect your personality