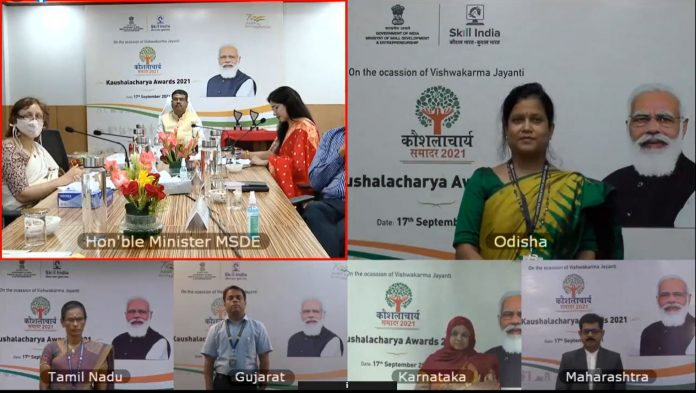 Speaking on the occasion Shri Pradhan said that our skill trainers have to play a crucial role in realizing the vision of our Prime Minister of making India, the skill capital of the world. He urged that we must work towards making skill more aspirational. He called for a deep-dive into the future of jobs and understand the skill demand of the future. Shri Pradhan pitched for adopting a bottom-up approach with a focus on innovative ways to upskill our trainers, and plan skill development at the grassroots.

The Minister stressed that the NEP has called for convergence of education and skills and Government is working on providing academic equivalence to skills and creating a robust integrated ecosystem. He said that the new business and skilling models are evolving which will play an important role in the post-pandemic world. With the paradigm of ‘Padhai and Kamai’, we must leverage this opportunity to empower our youth, he added.

The Minister also said that Prime Minister Shri Narendra Modi has given a clarion call for Sabka Saath, Sabka Vikas, Sabka Vishwas, Sabka Prayaas. This should be our spirit in all efforts as we move towards completing 100 years of India’s independence, he added.

Trainers were honoured for their contribution under various categories. Five trainers were awarded under the two categories of PMKVY Trainer and Excellence in PMKVY Master Trainer. Nine trainers received the award under JSS and two trainers were rewarded for their contribution to entrepreneurship. In addition, five candidates received awards under the apprenticeship category and two trainers were awarded from DGT for non-engineering category. Two awardees were felicitated in Engineering category. Industrial Training Institutes (ITIs), pillars of India’s vocational training ecosystem, had as many as 11 trainers who were felicitated.

Plus-II meritorious students to get 30,000 instead of free laptops this...