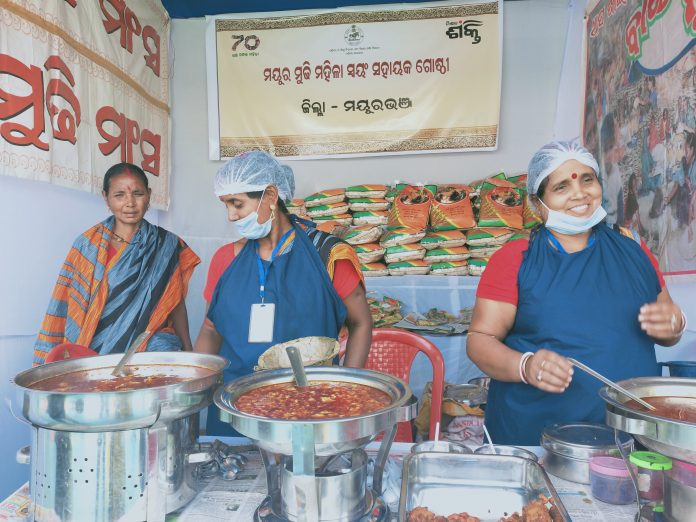 Despite social stigma, unfavorable economic condition and to helm all that patriarchal societies, these women from a Self Help Group (SHG) of Mayurbhanj District have vowed to walk the extra mile and set an example of self-reliance and ingenuity.

The success story of Itishree Kabi and other rural women, who together formed ‘Mayurbhanj Mudhi Women’s Swayam Sahayak Group’ in Tambakhuri Ramagobindpur, based on Self Help Group (SHG) method, has inspired many women. Noted for selling their exclusive ‘Mudhi Mansa’ at Mission Shakti Stall Mela at Exhibition Ground here, the group has emerged as the instance of transformation taking place in the Mayurbhanj district.

Started initially in 2003 with just 24 women, the group has now has 130 active members serving hot fresh ‘Mudhi Mansa.’  ‘Mudhi Aloodam’ ‘Chhana Masla’ and ‘Charbi Ghuguni.’ In the initial stage before the Mayur Mudhi Women’s group started, Itishree led other women to make a team named ‘Sangram Mahila Mandal’ in 1996 where they started to encourage the rural women to work independently making ‘Duna’(made with a leaf to serve kheer/Curry).

“We used to knock the doors of other women when their male family members were fast asleep. They would come out from their house to work with us independently”, Itishree Kabi, member of Mudhi Mahila Swayang Mahayak Group.

Building from starch, the SHG is now reported to have annual earnings of Rs 14 Lakh. Selling their special ‘Mudhi Mansa’ at Rs 120 at their stall is a big draw for the denizens who cannot get enough of their lip-smacking dishes. Baripada Mudhi, is natural, free from additives, and prepared through hygienic and indigenous ways. Mudhi (Puffed Rice) and Mansa (Mutton) the combination is one of the most likable foods in Odisha and entire North-east of India and is famous in the tiny township of Baripada town under Mayurbhanj District. Surprisingly, both at home and in the street food items, this item has not so far found any replacement and continued to stay king all snack food items.

Meanwhile, the Mission Shakti Mela which has begun from 5th December 2019 will continue till 16th December in IDCO Exhibition Ground, Unit-3, Bhubaneswar.

India won three medals including two silver in the Championship

Railways plan to spread Rail based tourism among masses through leasing...