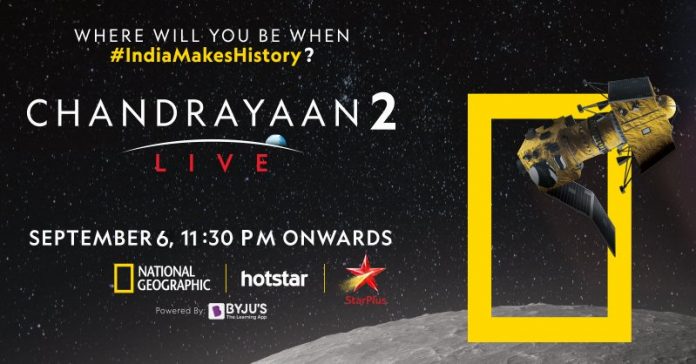 Where will you be when India makes history? Be there with NatGeoIndia, Starplus, StarBharat and Hotstar to witness Chandrayaan 2 Live updates on 6th September from 11:30 pm. Do watch as India goes further than ever before, bringing life to hopes and dreams of a billion Indians!

Chand ab door nahin!
Where will you be when #IndiaMakesHistory?#Chandrayaan2 LIVE, 6th Sept, 11:30pm onwards on StarPlus @NatGeoIndia and @hotstartweets pic.twitter.com/TECdCzQxNg

Chandrayaan 2 consists of a lunar orbiter, a lander named Vikram, and a lunar rover named Pragyan, all of which were developed in India. The lander and the rover will land on the near side of the Moon, in the south polar region at a latitude of about 70° south on 6 September 2019. The wheeled Pragyan rover will move on the lunar surface to perform on-site chemical analysis for 14 days (one lunar day).

This will relay data to Earth through the Chandrayaan-2 orbiter and lander, which were launched together on the same rocket. The orbiter will perform its mission for one year in a circularized lunar polar orbit of 100 × 100 km. As you are all making your fingers crossed, here is what is making Mission Chandrayaan 2 special-

1. It is the first space mission that conducts to achieve a soft landing on the Moon, Chandrayaan 2 is an Indian lunar mission that will boldly go where no country has ever gone before to the Moon’s South polar region.

2. Then Chandrayaan will shade light completely on the unexploited region that is dark side of the moon.

3. The technology of the India’s mission is extremely impressive, also cost-effective nature as the mission to soft-land on the Moon is the fact that it has been accomplished at a cost of around Rs 978 crore ($142 million).

4. Chandrayaan 2 has managed to keep its cost down because it has kept the equipment that it’s carrying into space to a minimum. The same principle the nation used in 2013 when it sent a spacecraft to Mars for about $74 million, a figure far more affordable than the $671 million spent by the United States to send a mission to the Moon in the same year.

5. The successful landing will remember India as the fourth country to achieve a soft landing on the Moon, after the space agencies of the USSR, the USA and China.

The aim of sending Vikram Lander and Pragyan Rober is to improve understanding of the moon which could lead to discoveries that will benefit India and humanity as a whole. These insights and experiences will cause a paradigm shift in how lunar expedition are approached for years to come propelling further voyages into the farthest frontiers.

Why are we going to the moon?

The moon is the closest cosmic body on which space discovery can be attempted and documented. It is also a promising testbed to demonstrate the technologies required for a deep space mission.

Chandrayaan 2 attempts to foster a new age of discovery, increase our understanding of space, stimulate the advertisement of technology, promote global alliance, and inspire a future generation of explorer and scientists.

Notably, Chandrayaan 2 lifted off in its second attempt from the Indian Space Research Organisation’s (ISRO’s) spaceport at Sriharikota in southern Andhra Pradesh on July 22.

Watch the live updates, be there, be a part of the historic Chandrayaan 2 Landing, to tell the future generations that yes i watched it live when it happened.

Things you need to teach your Children at early age