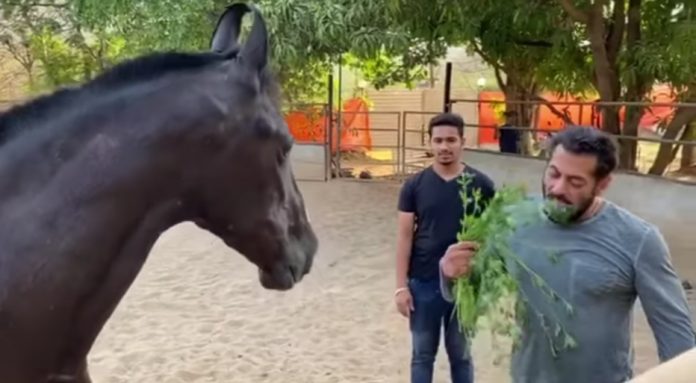 Being in quarantine, Bollywood Super Star posted a video where he was seen giving a sneak-peek into his breakfast time with his ‘love’ aka his favorite horse. While, due to the outbreak of coronavirus, Salman Khan is currently at his Panvel farmhouse along with some of his family members.

You won’t believe it! In while we admire Salman’s love for animals, you will be amused to see in this video, the Superstar not only fed leaves to his horse but also ate the same. Watch the video.

Breakfast with my love…

“It’s damn good ya.” The actor captioned the video, “Breakfast with my love.”

Also, the Actor had recently shared a video where he spoke about missing his father, Salim Khan who is residing alone in their Mumbai apartment, like the rest of their family along with him. In that video, Salman informed me that he has not met his father for three weeks.

A few weeks ago Salman was seen with his sketching talent. The actor was set to hit the screens this year with Radhe.