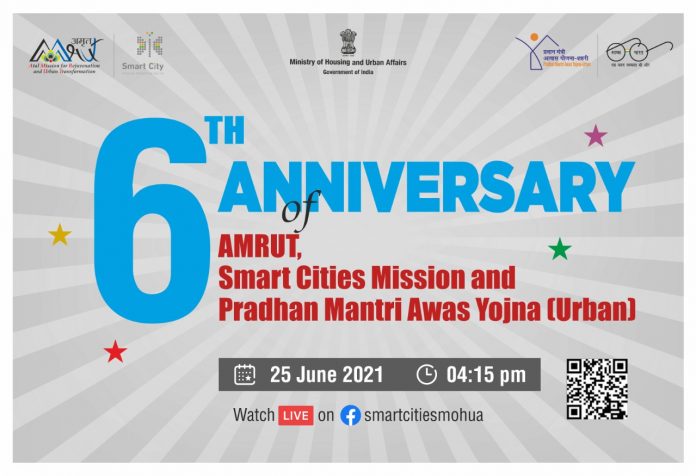 The Ministry of Housing and Urban Affairs (MoHUA) is organising an online event on 25th June, 2021 to commemorate 6 years of the launch of three transformative Urban Missions vis. Smart Cities Mission (SCM), AMRUT and Pradhan Mantri Awas Yojana-Urban (PMAY-U), which were launched by Prime Minister Shri Narendra Modi, on 25th June, 2015.The three schemes were part of a visionary agenda for urban rejuvenation and  were designed as part of a multi-layer strategy to meet the aspirations of 40% of India’s populationliving in cities.

The focus on the urban sector during the last 6 years can be gauged by the infusion of overallinvestmentstothe tune of Rs. 12 lakh crore, as compared to Rs. 1.5 lakh crore in the period between 2004-2014. The projects implemented under these three Missions have started to bring about perceptible change in the lives of India’s urban residents. The Missions have not only led to the development of urban infrastructure, whether be it better water supply, sanitation, housing for all but also have pioneered theuse of data, technology and innovation in the planning and management of our cities. These Missions played an important role during the Covid-19 pandemic bringing succour to the lives of people faced with the vagaries of the pandemic.

The Anniversary event will highlight some of the important initiatives being implemented by MoHUA. The event will be presided over by shri Hardeep S. Puri, Minister of State (Independent Charge), Housing and Urban Affairs. Shri Durga Shanker Mishra, Secretary, Housing and Urban Affairs has invited all key urban stakeholders from Central and State Governments to join the event, including inter alia, Principal Secretaries of States/UTs, Municipal Commissioners of Cities, MDs/CEOs of Smart Cities, State Level Nodal Agencies/ Mission Directorates, along with their officials and team members, professionals, industry representatives, media, and members of academia.

The date also marks 45 years of establishment of National Institute of Urban Affairs, an autonomous body of MoHUA, tasked to bridge the gap between research and practice on issues related to urbanization.

PMAY-U, under the aegis of ‘Housing for All’, addresses urban housing shortage among the EWS/LIG and MIG categories including the slum dwellers by ensuring a ‘pucca’ house to all eligible urban households by the year 2022, when the nation completes 75 years of its Independence. A total of 1.12 crore houses have been sanctioned under Pradhan Mantri Awas Yojana (U), of which 82.5 lakh houses have been grounded and around 48 lakh have been completed.

At the event to mark the anniversary, a short movie contest on PMAY-U will be declared open for students, youths, non-governmental organizations, institutions, and individual/groups in the run up to India’s 75th year of Independence. Fortnight-long workshops on Awas Par Samvad (Townhall) are planned to be initiated for Schools/Colleges/Institutions in 75 cities.

Atal Mission for Rejuvenation & Urban Transformation (AMRUT) was launched to address the issues of Water Supply, Sewerage and septage management, Storm Water Drainage to reduce flooding, Non-motorized Urban Transport and creating green space/parks in 500 cities with more than 1 lakh population. The achievements of the mission are highlighted as under:

Projects developed under the Smart Cities Mission are multi-sectoral and mirror the aspirations of the local population. As on date, 69 Smart cities have developed and operationalised their Integrated Command and Control Centres (ICCCs) in the country. These operational ICCCs functioned as war-rooms for COVID management, and along with other smart infrastructure developed under the mission, helped cities in fighting the pandemic through information dissemination, improving communication, predictive analysis and supporting effective management.

During the 6th Anniversary event, MoHUA will be announcing the results of the India Smart Cities Awards Contest (ISAC) 2020. The much-awaited results under the Data Maturity Assessment Framework (DMAF) and Climate Smart Cities Assessment Framework (CSCAF) will also be released during the event. The event will also feature release of, inter alia, India Smart Cities Fellowship Report, the TULIP annual report, and knowledge products developed by National Institute of Urban Affairs (NIUA).

PM greets His Holiness Dalai Lama on his 86th birthday