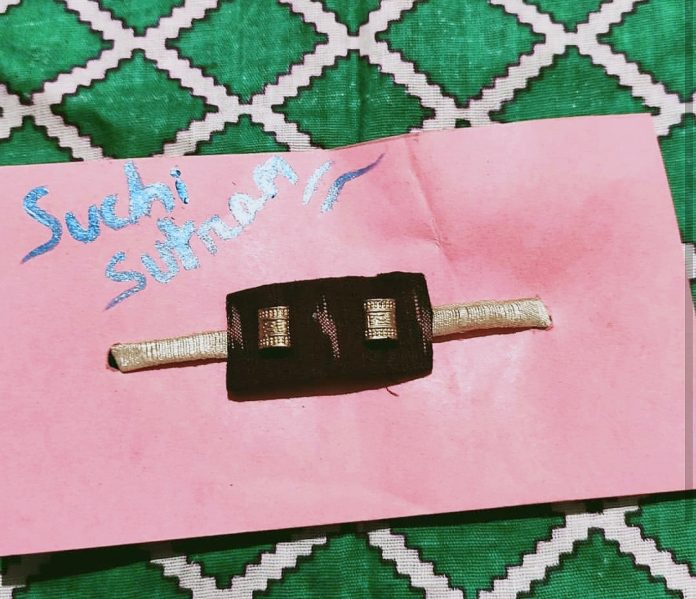 A 23 years old Sudeshna Tripathy, owner of SuchiSutram, who hails from Cuttack celebrates this raksha bandha making a unique rakhi made up of Handowoven Sambalpuri Ikat cotton fabric.

SuchiSutram is basically a fashion designer page on Instagram, which contains creative and unique clothing’s, and accessories.

Earlier, we must have heard about most popular Sambalpuri saree of Odisha and now with the advancement of some designers thoughts we can see some dresses stuffs of sambalpuri fabric selling in the market.

After asking about this sambalpuri handmade fabric rakhi concept to the designer Tripathy, she said “if we make clothes out of Sambalpuri fabric to wear, why can’t we make rakhi? Out of it.”

She further said that, “While I was thinking about giving my brother an unique rakhi gift this year, this concept stroke to my mind and had a post of it in my designer page on social media, few days before Raksha Bandhan. Later, I was overjoyed seeing that some even liked my idea and they ordered me some number of rakhis.”

“I sold my rakhi between the price band of Rs 15-30 each with no objection. I think this is my greatest achievement”, She added. From the age of 16 years old itself Sudeshna had her dream to become a fashion designer. Initially she learned some basic tricks of making dress, blouse from her mother and later after her higher education in Arts stream, she got her admission in Apparel Training and Design Centre (ATDC), with a speciality on apparel manufacturing and technology.

After completion of her course, the young girl thought to open her own boutique, as she had her dream from childhood to have own one.

Her experiment with fabrics and support from family motivated her to become a fashion designer. Presently, she use her home as a work place, and manages her work in her boutique without anyone’s help, working solo.

“Sometimes even people say why you charge more than the products sold in market”, said the fury voice of designer, giving a pause she added that, at the same she makes them realise with her design showing the difference between the clothes sold in market and the designers collection.”

Although, SuchiSutram designer page rarely make post on Instagram, but it has good impression and demand in its native place.

First ever Starbucks opens in Odisha