To ensure good governance and transparency in administration the Chief Minister of Odisha Sri Naveen Patnaik made an announcement of his new funda ‘Mo Sarkar’ during the day of Freedom.

The government runs on 5-Ts mantra of technology, transparency, team work, time and transformation in the state; while this time new ‘Mo Sarkar’ funda added on it, which will be implemented from Second October, on Gandhi Jayanti onwards in the present year.

While launching this new funda, Patnaik said that, he will personally call the fellow people of the state and will take their feedback of the services from the hospital and Police station, also about the experience of government offices.

However, In first phase of the program the state Department of Health and Human Services and Police Station will be covered and all the departments will implement the programme by March 5, 2020 in the second phase.

CM asserted that, The electric connection has already been made to all the villages, if still then, till now whoever have not got any electric connection, can submit their applications at their respective Panchayat office, the connection will be provided to them within 48 hours.

To have a superior Odisha, the CM seeks the people to join each others hand together for better the future. 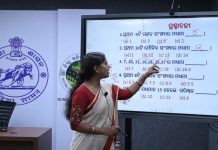 Children in MP are using giant road as blackboard

Say No to Tobacco