There is a woman who did the impossible as possible. She created the whole village just for women, and no men can enter. Who is she? How did she create a village?? And why are men not allowed??

In Kenya, in the middle of the desert, there is a village called Umoja and this is where a woman named Rebecca Lolosoli created the village where only women are allowed. According to Nas Daily report, 30 years ago Rebecca was in an abusive marriage, she was beaten and treated like a second-class citizen. But when she looked around, she saw that she was not the only one, she was not alone, it’s normal for women to be beaten and raped. It’s normal for girls to be married as kids and its even normal for them to have their private parts cut and mutilated.

Rebecca explained briefly in the report that, in Samburu Culture, it is traditional for a girl to be circumcised when she is ready to be married. It’s so normal that when Rebecca asked authorities to protect them from their husbands, no one helped. The world turned their back to them.

So, one day Rebecca and a group of 14 other women decided to create their own world. They said they don’t need men, they can make it on their own. All the around them thought- How could they possibly make it by themselves? they were women and women are weak but Rebecca and her women proved everyone wrong. They picked out a piece of land called it ”Umoja- which means Unity” and with their own hands, they built everything.

They built huts out of mud and trees, they made jewellery by hand and sold to tourist for money. They even created a school, to teach their own children. In school, the girls were taught to believe in themselves as women even without men. In this village, the women sing, they dance, they raise their children in peace entirely without men’s presence in their own little world.

No men are allowed to live here not even their own boyfriends. Only Male youth stay with them until they are 18-years-old, they may be allowed to stay with them if they respect the guidelines of the women leaders. Initially, some men were jealous so they set up their own villages nearby to block tourism from coming in. They even got into Umoja and attacked the women. But Rebecca and everybody else held strong. They saved up money and eventually bought off the entire men’s village.

Now Umoja is a 100 women strong and each and every one of them is successful. 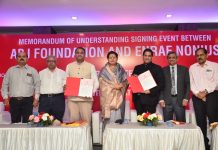 I-STEM portal academic users will now be able to access the...