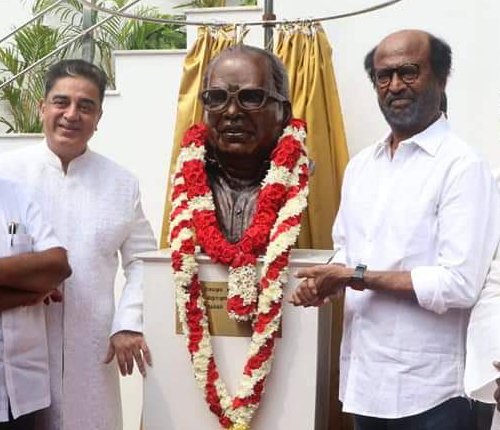 A statue of the legendary director was unveiled at the new Raaj Kamal Film International Office in Chennai by the film star Kamal Haasan and Rajinikanth.

“We decided decades back that our paths are different, we decided to respect each other and we are still following it. We were fans of each other during the time when we didn’t have fans, we appreciate each other always” @ikamalhaasan on @rajinikanth spoke on the occasion.

@aksharahaasan1 and Sruti Haasan were present at the opening of the new RKFI office and the unveiling of KB sir’s statue. “Such a beautiful day with some of the greatest legends of cinema here To celebrate this wonderful day. We feel so…” said Sruti.

Other film personality like Director #Maniratnam, Director #KSRavikumar, and some others also grace the occasion.

The statue of the director is 60kg in weight and 23 inches in height. (HINDU)

After the event, Kamal and his team have also organised a screening of Hey Ram at Sathyam Cinemas in Chennai, which followed by an interactive Q and A session.

The highway to death

How to add Google search widget to home screen ?