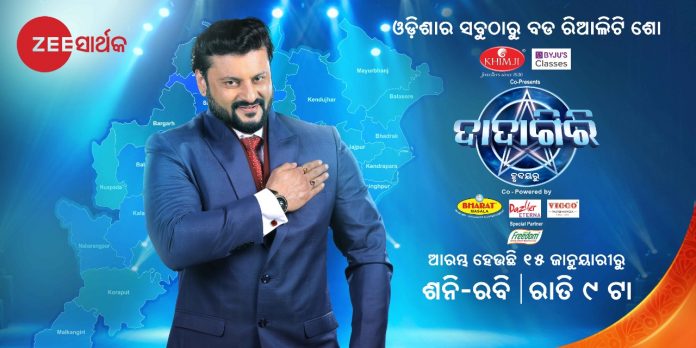 Small things done with great love can change the world. All our dreams can come true if we have the courage to pursue them and everyone’s dream can come true if you just stick to it and work hard.  No matter what industry you work in, hard work and team spirit is the recipe for a burgeoning and successful career. Zee Sarthak’s reinvents the word Dadagiri into Dadagiri – Hrudaya ru which tells us about how a stronger person can reach out to the underprivileged, lend a helping hand, and provide for the helpless. Zee Sarthak deems such selfless acts of kindness and compassion as the true essence of dadagiri. Via different aspects of the show, Dadagiri- Hrudaya ru will contribute to the development and well being of underprivileged people of the districts. Zee Sarthak made an innovative approach to bring such people in one platform. Ollywood Mega Star Anubhav Mohanty will be hosting the show “Dadagiri Hrudayaru” which will telecast from 15th of January 2022. This is a historic movement in Odisha’s television and entertainment industry.

Zee Sarthak is not only an entertainment channel but an emotion for millions of Odia people. Zee Sarthak always puts in ample effort to showcase something different for its audience. First time in the history of Odia entertainment industry Film Star Anubhav will do Dadagiri -Hrudaya Ru in a way which will definitely rule the hearts of millions of Odia audience. Even Anubhav himself is quite excited about the show.

Mr. Arghya Roy Chowdhury, Chief Channel Officer- Zee Sarthak has stated that the entire team is eagerly wating for the airing of first show of Dadagiri which is going to be unveiled on 15th of January this year. He hopes that this show will not only change the Odia entertainment industry but will also create a legacy as we move ahead with the show. As people will see their adorable and lovable star in the small screen and hope they will cherish the each and every moment of it.