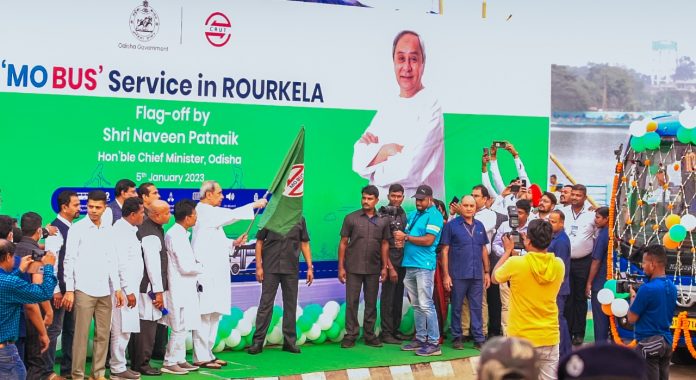 For the past four years, Capital Region Urban Transport (CRUT) has provided Mo Bus service in Odisha’s Capital Region which includes Bhubaneswar, Cuttack, Khordha, Pipili, Puri, and Konark. This has drastically eased the daily commuting needs of the citizens and for many, Mo Bus has become the most preferred mode of transportation.

After becoming the mobility lifeline for the people of the Capital Region of Odisha, in view of the overwhelming support and love of the public, CRUT expanded its Mo Bus service in Rourkela. Mo Bus launched its services in Rourkela on 5th January, 2023 with 25 Non AC Buses and 5 AC buses in the 1st phase and has plans to increase the total number to 100 buses in the coming months. CRUT envisions to promote cashless commuting experience in its Mo Bus service in Rourkela through its Mo Bus Card – tap and pay. There will also be provision for purchase of online tickets, live tracking and other online services from the App. These initiatives would ensure the commuters to have a hassle-free and well-informed journey.

Mo Bus in Rourkela will start being operational in the following routes:-

“The Mo Bus service in Rourkela will provide convenient and efficient transportation options for residents and visitors. With a variety of routes covering different parts of the city and surrounding areas, people can commute hassle-free within the city and nearby areas. The service expansion to Rourkela will likely to have a positive impact on the local community,” stated Shri Vijay Amruta Kulange, MD, CRUT.

“It’s overwhelming that CRUT has grown and garnered so much love from the people of Odisha and within such a short span of time, it has expanded its services and fleet. Now we are expanding our services to Rourkela and in the coming years, we strive to expand it to other places as well. CRUT has always prioritized its commuters. This time too it will serve you with the same amount of trust and the best of services in the city of Rourkela and its adjoining places”, said Smt Dipti Mahapatro, GM, CRUT.

Amplify your skills for free by joining this foundation