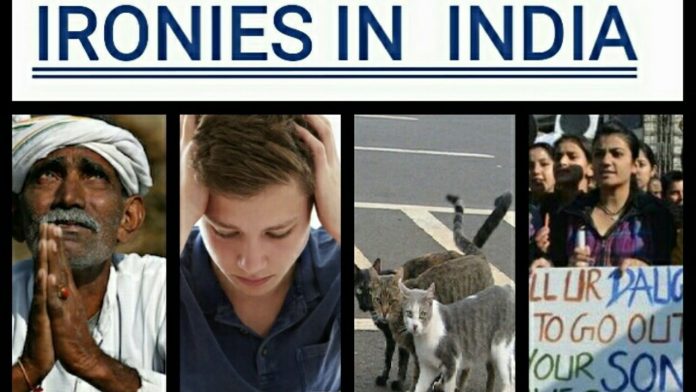 Most of us know that what is good and bad for us, most of our contradiction arise from society and few are from our attitude. Here, are one of those best lines that we were aware of it, let’s have a look!

1. Politics Divide Us, Terrorist Unite Us.

2. Everyone Is in Hurry, But No One reaches in Time.

4. Most people who fight over Gita and Quran, have probably Never Read any of them.

5. We rather spend more on our Daughter’s wedding, than on her Education.

6. The Shoes that we wear are sold in air conditioned show rooms, the Vegetables that we eat are sold on the footpaths.

7. We live in a country where seeing a Policeman makes us nervous rather than feeling Safe.

8. In IAS exam, A person writes a brilliant 1500 words essay about how dowry is a social evil and cracks the exam by impressing everyone. Later his parents demand a dowry in crores, because he is an IAS officer.

9. Indians are obsessed with screen guards on their smartphones even though most come with scratch proof gorilla glass but never bother wearing a helmet while riding bikes.

10. Try to understand people before trusting them because, we are living in such a world, where artificial lemon flavour is used for welcome drink and real lemon is used in finger bowl.

A Tribute to Architect of Modern Odisha on 104 Birth Anniversary

How to be happy at Workplace