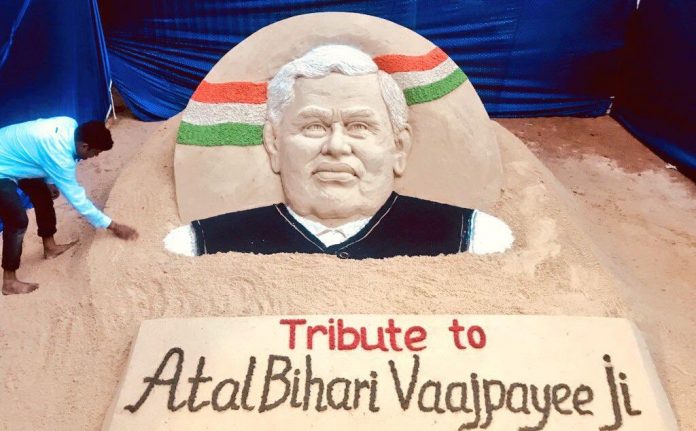 Atal Ji passed away at the age of 93, last year on August 16 at All India Institute of Medical Sciences (AIIMS) following a prolonged illness. Vajpayee was born to Krishna Devi and Krishna Bihari Vajpayee in a Brahmin family on 25 December 1924 in Gwalior.

He was decorated with the highest civilian honour, the Bharat Ratna in 2015 and Padma Vibhushan in 1992.

He is the First BJP leader who became the PM, however, Vajpayee ji’s Birthday celebrated on December 25, as ‘Good Governance Day’, declared by the party in 2014. Defence Minister Rajnath Singh pays tribute to former PM Vajpayee, on his death anniversary, in Pokhran. Nuclear Test was conducted in May 1998 in Pokhran when Vajpayee was the Prime Minister. The personality of Atal Ji known during 1999 Kargil war, when America phoned him at night and advised him to give Kashmir to Pakistan or else Pakistan would launch nuclear bomb on India. Then after Vajpayee said, ” I already have considered that 50% of India has been wiped off but I can assure you, there would be no sign of Pakistan on world map by tomorrow morning”,  and he hangged up.

Vajpayee was ranked number 9 in Outlook India’s poll of the Greatest Indian in the year 2012, in August 2018, Naya Raipur was renamed as Atal Nagar.

He adopted and raised Namita Bhattacharya as his own child, the daughter of longtime friend Rajkumari Kaul and BN Kaul.

Apart from being a politician he is a excellent poet and writer in both English and Hindi language, his collection of poetry and prose are:-

India’s Perspectives on ASEAN and the Asia-Pacific Region (2003)

Meri Ikyavana Kavitaem (1995). Some of these poems were set to music by Jagjit Singh for his album Samvedna.

Politicians are thick upon the ground in India. He was a rarer breed, a statesman the man who showed India the importance of good governance! In a political life that spanned seven decades, he rose to become one of India’s most consequential prime ministers.

Some famous quotes of Atal Ji: Why are my breast so sore during pregnancy? Tips to maintain

Which one to prefer, Hard work or Smart work

Smt Smriti Zubin Irani Calls for Research on the impact of...