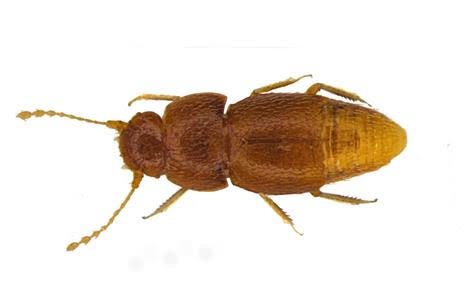 The tiny beetle has just been named after climate activist Greta Thunberg by Natural History Museum London, the Nelloptodes great, is less than one millimeter long and has no eyes or wings, which is belongs to the Ptiliidae family. While, the tiny beetle is trending in Twitter on Friday.

It belongs to a 1960s collection from samples of soil and leaf litter in the Kenyan capital, Nairobi, which was donated to the Natural History Museum in 1978. The minute species of beetle is being named Nelloptodes greater in appreciation of 16 years old Swede.

When making the announcement, London’s Natural History Museum said, “You are never too small to make a difference.’

Nelloptodes create named for Greta Thunberg in appreciation of her tireless commitment to championing environmental issues. While Beetles play a vital role in our natural ecosystems & are increasingly affected by environmental degradation.

Going down an entomology hole now, Ptiliidae beetles are so small their wings are mere brushes. Effectively they SWIM through the air.

Michael Darby, a scientific associate at the museum who found the insect in its collection of millions of animal specimens, chose the name to acknowledge her “outstanding contribution” to raising awareness of environmental issues.

As per wiki, The Natural History Museum in London is a natural history museum that exhibits a vast range of specimens from various segments of natural history.

It is one of three major museums on Exhibition Road in South Kensington, the others being the Science Museum and the Victoria and Albert Museum. The Natural History Museum’s main frontage, however, is on Cromwell Road.