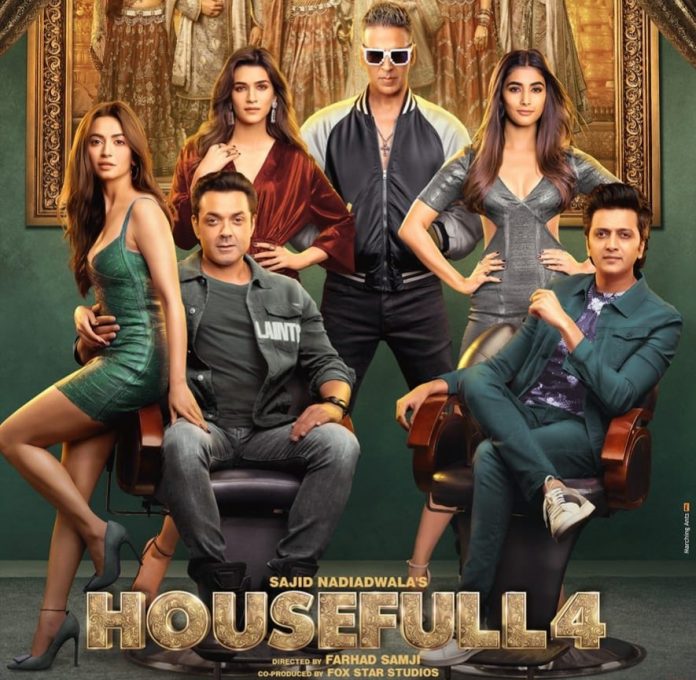 Akshay Kumar openly declared the first look poster of house of comedy fun and entertainment, Housefull 2 for which you all are excited for. However, the trailer out on Friday, September 27.

Here is how Akshay declares the characters of his upcoming movie in his twitter account, let’s scroll up! In this character meet the 1419’s Rajkumar Bala aka Akshay Kumar and 2019’s London return Harry! Witness how they embark upon this journey of ultimate chaos, confusion and madness in the Housefull4. In this Character Dharamputra aka Bobby Deol plays bravery and Courageous role where we will get to see how the next role Dharma will become Max in this Journey back in time with Housefull 4. Here in this character one will start the story and another one will come to conclusion. Where one is Rajkumari Madhu aka ‘Kriti Sanon’ from Sitamgarh and also Kriti in movie from London. In this character you will know about the unique story and luck of Rajkumari Mala aka ‘Pooja Hegde’ and as Pooja in movie also. In this character you will see 600 years old story of Neha aka actress ‘Kriti Kharbanda’ and Meena.

According to the above character of Housefull 4, the movie story sounds like it is going to bring out a unique story which will start from London but will end up in Sitamgarh. Let’s just wait for the date to release the movie.