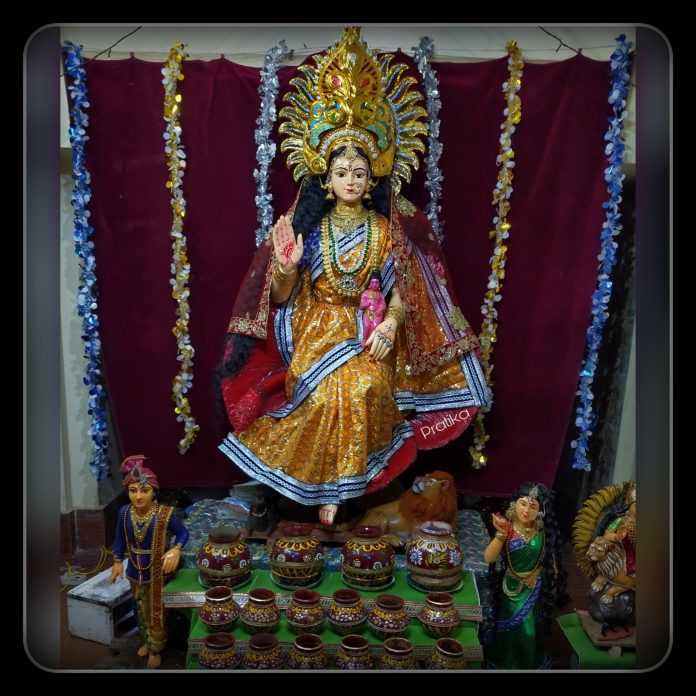 Khudurukuni festival is basically being conducted by unmarried Odia girls for welfare of their brothers, they worship the clay idol of goddess Maa Mangala ‘ Bhalukuni’ during the month of Bhadraba in between August-September on Sundays after the full moon day of Raksha Bandhan.

The festival of Odisha comes with a mythology from the story of a young woman, Tapoi (devi Mangala) who faced torture of her sisters-in-law when her brothers were away for trade.

As per rituals, on this occasion group of unmarried girls wake up early in the morning and pluck different varieties of flowers to decorate the devi, after that they go to nearby river bank/pond to get bath, at the same time they make ‘balunka,’ clay balls to do a kind of small puja same way they do to the goddess, in this puja they make bath to the clay balls by washing it with haldi water; decorate it with flower; offer dhup, prasad, alati, and prayer. After the completion of puja and offerings, they tie a ‘brata,’ white thread coloured on their left arm, then together they return back to their respective homes. Menu of items the girls especially follow whole day on this eve is some special dishes like ‘Chakuli pitha’, Puri, Paratha, Khicdi, dalma, aludum. The only difference is that the food will be made without onion and sunflower oil. While in evening time wearing fresh clothes, they use the same format of puja only with the add on of ‘chita,’ (art drawn through grinding rice water) drawn in front of devi and read the tapoi books, and later on offer puspanjali with prayer.

Best part is that this festival teaches girls, the importance of togetherness and teamwork. Story of tapoi and the reason why people celebrate this festival?

As per peoples believe, there was rich trader family named Sadhaba, in that family the trader and his wife had only daughter Tapoi along with seven son, and daughter-in-laws.

Being the younger one Tapoi was much loved by the family members. Once, while she was with her friend outside the house, one evil brahmin widow came to her and taunt her saying that ‘being a rich family’s daughter you are with ordinary girls’ and asked her to play with a moon made of gold.

To prove that women, tapoi left that place immediately and went to house to demand her parents to make gold moon for her. Her parents accepted her need and by that time it was finished both her mother and father died. Then she became alone.

After that the financial condition of the family worsened time by time. When the trading time came, her brothers left for sea, ordering their wives to take care of their lonely sister.

All was going good, seeing the good times of trader family, one day that same jealous widow women visited their house and made her sister in laws against her, following which one of elder sister brought goats and assigned her duty, to take care.

Following all the instructions, tapoi left for fields taking goats with her, where she suddenly felt ill, after feeling capable of going home when she came back her elder sister found one goat missing. She forced tapoi to go back and find out the lost one.

In that dark rainy night, while going for search she found temple of Maa Mangala, where she offered prayer and few grains to the goddess for her safety.

Getting pleased with her prayer the goddess helped her showing the way to find out the goat. Her bothers returned at the same time from trading journey. Seeing such condition of their only sister tapoi, they got angry on their wives and thought to teach them lessons. However, they made a plan for it.

Tapoi’s brothers made her dress like a princess and gave her knife by giving her order to sit on boat corner, and at the same time they sent message to their home of their arrival. After the wives welcome their husbands, the angry brothers made their spouses to worship the god on boat. When they worshiped tapoi, she cut their nose with nives.

Since then the girls in Odisha perform Khudurukuni festival for their brothers. However, the brahmins girls were restricted for this ritual, because of that brahmin evil widow, who was responsible for Tapoi’s bad days.

Salman Khan eats leaves while feeding his Horse for breakfast