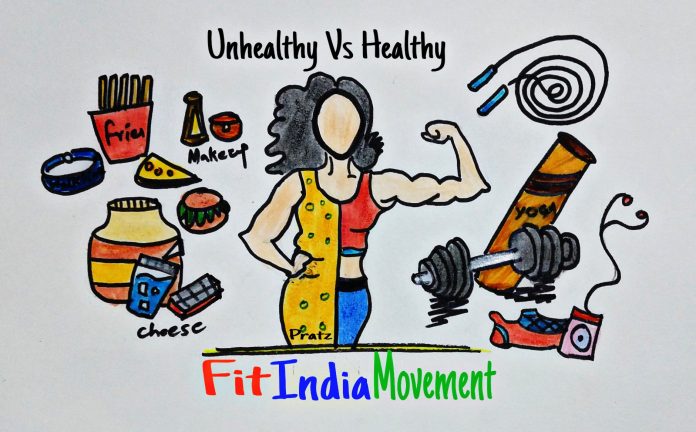 As Fitness is an important aspect of well being and a happy life. It is preventive and helps to promote wellness.

Prime Minister Narendra Modi launches Fit India Movement at Indira Gandhi Stadium in New Delhi, on the occasion of National Sports Day on Thursday, and says, “On this day a great sportsperson was born, Major Dhyan Chand. He amazed the world with his his fitness, stamina, and hockey stick.” Major Dhyan Chand, the greatest ever hockey player and ‘Hockey ke Jadugar’ is a Padma Bhushan recipient and a three time Olympic winner, he will forever stand as Indian Sports tallest figure. During his launch campaign, Modi said, a Huge population of India is suffering from diabetes and hypertension. This is a big concern, but we have a ray of hope if we understand lifestyle diseases are caused by lifestyle disorder.

“Fitness has always been an integral part of our culture. But, there is indifference towards fitness issues now. A few decades back, a normal person would walk 8-10km in a day, do cycling or run. But, with technology, physical activity has reduced. We walk less now and the same technology tells us that we are not walking enough,” he added.

Later, PM congratulated the winners of the national sports awards and highly praised the India’s sporting achievements. Be it boxing, badminton, tennis or any sport, our athletes are giving new wings to our aspirations. Their medals are not just a result of their hard work but also a reflection of a new India’s confidence,” he said.

Modi has also given simple tips that can make people healthy in their day-to-day lives.

Modi also launched a “Fitness Logo” following which he said that he will launch a “Fitness Pledge” too where people will read that, “I promise to myself that I will devote time for physical activity and sports every day and I will encourage my family members and neighbours to be physically fit and make India a fit nation.”

Sachin Tendulkar had spend National Sports Day at the St. Anthony’s old age home, and felt blessed by the love shown by them by playing carrom with them. While Shilpa Shetty actively participated in the launch of Movement by PM Modi ji. Where She contributed her valuable tips to make it a people’s movement. OJEE to be held in three shifts

Why do we use face emoji?