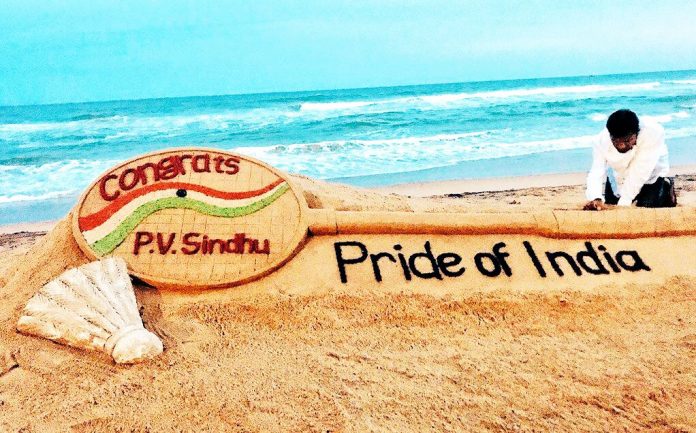 In twitter, Pattnaik has shared picture of his sand mural, where he had congratulated Sindhu referring to her as a ‘pride of India’. With this, he also made Badminton racket and shuttlecock.

As per sources, the female shuttler Sindhu became the first Indian to win (Badminton World Federation) BTF world championships in Basel. While, she beat Japan’s Nozomi Okuhara at a score of 21-7, 21-7 to take home the gold medal on Sunday. After winning she dedicated her medal to her mother as a birthday gift on the same day, and thanked her coach Pullela Gopichand  and staff. However, fans across the country are sending her warm congratulations on her big day. Pusarla Venkata Sindhu who is well known as PV Sindhu is a native of Hyderabad. She is 24 years old now and was born on July 5, 1995. While her parents P. V. Ramana and P. Vijaya, both are professional volleyball players, her elder sister, P. V. Divya, who was a national-level handball player is a doctor as she was not interested to take sports as profession.

She was honored with India’s fourth highest civilian honor, the Padma Shri on March 2015.

At the age of eight Sindhu started playing Badminton. Before she joined Pullela Gopichand’s Gopichand Badminton Academy, she learned the basics of the sport with the guidance of Mehboob Ali at the badminton courts of Indian Railway Institute of Signal Engineering and Telecommunications in Secunderabad.

Culture and traditions can be protected only if we preserve our...